I just got back from a two-weeks research trip to Iran, and since I haven’t updated this blog for a while, this is the ideal opportunity for me to get back on here, and bring this embarrassing, nearly month-long silence to an end.

So, I was in Iran on the quite specific task of sorting one chapter of my book – which I apparently did, and that’s good news. Among meetings, library work, lectures and social life, though, not much time was left to indulge in smelling around – which I wasn’t supposed to do anyway, being on a funded business trip. At any rate, whatever the objective of the journey, friends perfumers asked me to bring back some rose otto from the Kashan area – for which I had already established contacts from home. My contacts, however, proved unreliable and the moment I was about to finalise the deal, they made excuses about now being end season and attempted to rise the price by about 50%. I said goodbye, then, and gave up. 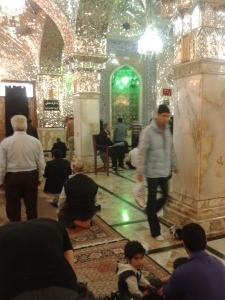 Frustrated by the failure, I still needed to take a break from Tehran and managed to take a day off and head to Kashan. My intention was purely leisurely – the last thing I wanted was to spend a frustrating whole day at Kashan’s market, dodging the bazaris attempts to sell me perfectly recreated versions of the ‘pure’ rose otto of Ghamsar. I was going to go to Ghamsar on an olfactory pilgrimage, very much like one would go to Grasse if he happens to travel in Provence – but I had totally given up all hopes to come to Tehran with the precious juice. END_OF_DOCUMENT_TOKEN_TO_BE_REPLACED

A study room for BS Honours

Practical examples and theoretical reflections on the do's and don'ts of using digital tools for your study and research in Arabic and Islamic Studies.

Chemist in the Bottle
NUR

~a scented journey from Canada to Grasse.

behind the scenes at sonomascentstudio.com